A Snippet of History

The village of Wroxall lies midway between Shanklin and Ventnor, and is surrounded by St. Martin’s Down, Littledown, Span and Stenbury, over which are lovely walks to Shanklin, Ventnor and Luccombe. The name of the village is interesting, “Wroc” meaning a buzzard, and the whole word possibly “the buzzard’s nook”. It was recorded in 1038 as Wrocceseale, and in Domesday Book as Warocchesselle.

Many of the houses in the main street were originally built to accommodate the workmen who were tunnelling from Wroxall to Ventnor through the downs, constructing the railway which was unfortunately shut down in 1966 after nearly one hundred years.

Before the railway, a stage coach ran from Godshill to Freshwater, the horses being changed at Brighstone; and before there were any buses, a waggonette, drawn by two horses, conveyed villagers to other parts of the Island. The village, however, was self-sufficient, the shops catering for all the needs of the residents. There were then three bakers, but today, with an increased population, no baker exists in the village. There was a blacksmith’s forge where horses were shod and all ancillary jobs undertaken. A bacon factory provided work for many of the inhabitants, but this was closed several years ago.

It is said that the two thatched cottages in the centre of the village were used by smugglers who came across the downs from Ventnor, to hide their illicit cargoes. Wroxall Cross Farm has a lovely old house, and there is also a very old house near the Star Inn, and another at the end of Manor Road.

Associated with Wroxall is Appuldurcombe House; the name was derived originally from the apple trees that grew in the valley. The first house was situated some distance from the present building and had an interesting story – from its foundation as a cell of the Abbey of Monteburg in the 13th century, passing through generations of the Worsley family until it was deliberately destroyed by Sir Robert Worsley in the early 1700s, boasting that he had not left one stone standing. He then built a new Appuldurcombe House in 1710; it contained many rooms including twenty bedrooms with dressing-rooms. Sir Robert turned it into a museum to house the collection of antiques, paintings and statuary, gathered during his extensive travels. The great house was once used as a school; and occupied for a time by Benedictine monks who later removed to Quarr Abbey.

During the last war bomb fell close to the house, causing such extensive damage that virtually only the shell remains. It is administered by English Heritage, and is open to the public. A short distance from the entrance stands a very old thatched house, Church Cottage, which was once used as a chapel by the Worsleys. It is now a private dwelling.

Village from the outskirts 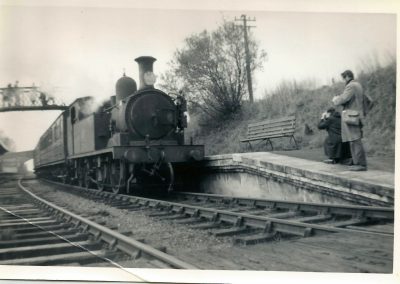 We use cookies on our website to give you the most relevant experience by remembering your preferences and repeat visits. By clicking “Accept All”, you consent to the use of ALL the cookies. However, you may visit "Cookie Settings" to provide a controlled consent.
Cookie SettingsAccept All
Manage consent

This website uses cookies to improve your experience while you navigate through the website. Out of these, the cookies that are categorized as necessary are stored on your browser as they are essential for the working of basic functionalities of the website. We also use third-party cookies that help us analyze and understand how you use this website. These cookies will be stored in your browser only with your consent. You also have the option to opt-out of these cookies. But opting out of some of these cookies may affect your browsing experience.
Necessary Always Enabled
Necessary cookies are absolutely essential for the website to function properly. These cookies ensure basic functionalities and security features of the website, anonymously.
Functional
Functional cookies help to perform certain functionalities like sharing the content of the website on social media platforms, collect feedbacks, and other third-party features.
Performance
Performance cookies are used to understand and analyze the key performance indexes of the website which helps in delivering a better user experience for the visitors.
Analytics
Analytical cookies are used to understand how visitors interact with the website. These cookies help provide information on metrics the number of visitors, bounce rate, traffic source, etc.
Advertisement
Advertisement cookies are used to provide visitors with relevant ads and marketing campaigns. These cookies track visitors across websites and collect information to provide customized ads.
Others
Other uncategorized cookies are those that are being analyzed and have not been classified into a category as yet.
SAVE & ACCEPT
Font Resize
Contrast
Accessibility by WAH